Spotlight on Haydee Zelideth: Capturing the spirit of the era

With just 6 performances to go before closing night (May 18!), we’re proud to continue to introduce you to the remarkable artists who are bringing Playing Hot to life. Today we introduce you to costume designer, Haydee Zelideth. Learn more from Haydee below, and snag your tickets to Playing Hot. 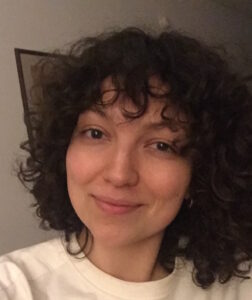 Haydee Zelideth: I’ve worked with Jaki before and really enjoy our process and relationship, so I’m always down to play together. The piece itself was exciting to me because of 1) the live music aspect 2) the piece itself was engaging and the first time I read it I was reacting out loud (which is a good sign that I like something) 3) the story of Buddy Bolden is a fascinating one and one that I had known nothing about. The way the creatives really dig into his history and fold into it the context of jazz and how big of an influence it has had on music throughout the 20th and 21st century is very effective. Their dramaturgy and commitment to telling the story was apparent when first reading the text.

PTC: What do you want the folks reading this to know about Playing Hot? What’s the most important element of this project to you?

HZ: Costumes – it’s a mix of everything I love. I’ve always sketched and made up stories growing up. I was part of the drama club in high school and did acting for a brief stint in college. I’ve always had an interest in clothes, history and art. I kind of stumbled into costume design and really fell in love with it – it’s a combination of everything I like. And no week is ever the same, so its never boring.

PTC: What has been your approach to bringing New Orleans to Midtown New York? What elements have been important to you to focus on? Any key areas of inspiration?

HZ: With any project I always focus on the dramaturgy of the piece first. What is the history of the place? What is the history of the characters? I started with those questions and began looking at images from turn of the century New Orleans. What was important was capturing the spirit of the era without being bogged down in the historical details of the clothing. It also had to be something that allowed actors to swiftly move between a wide range of characters. I loved figuring out what the voodoo parade was going to look like. In that process I found some great images from Mardi Gras during the early 1900s. Most of the looks from that era were pieced together with items that people had available in their homes – it had a crafty look but paired with such stark masks creates an eerie look.

PTC: If you there were to be an “untold true story” about your own life, what would be the subject? What would it be called?

HZ: Bag Lady  – What costume designers do is very much an untold true story. Clothes are deceivingly difficult to master. There’s so much work involved in bringing a show to life. There’s a lot of thinking, dreaming, researching, talking, schlepping, being a therapist, shopping, returning, looking at things, taping, sewing, crafting last minute, etc etc etc that happens. All of which involved carrying a lot of thing in bags! I remember one of my teachers, Jane Greenwood, likened being a costume designer to taking a vow.

Haydee is also currently working on a production of Pride & Prejudice with the Actors’ Shakespeare Project in Boston, on Mojada at the Public Theater, and on Monsoon Season with Rattlestick at the Edinburgh Fridge Festival. You can follow her on Instagram at @haydeezelideth and don’t forget to see her work up close at Playing Hot, playing now through May 18. Grab your tickets today!