Spotlight on Peter Nelson: Pieces like Playing Hot firmly plant themselves against the grain

Playing Hot performances begin THIS WEEK, on Thursday, April 18. In advance of first preview, we’re thrilled to introduce you to yet another remarkable member of our band. Today we’re featuring Peter Nelson, trombonist and singer, who is playing the sousaphone in Playing Hot. Hear from Peter below, and grab your tickets to Playing Hot today! Prices will be going up when performances start. 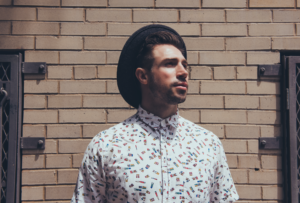 Pipeline Theatre Company: What do you want the folks reading this to know about Playing Hot? What’s the most important element of this project to you?

Peter Nelson: Theatre celebrating one of the most influential unsung heroes of American music is such a special endeavor. The catalogue of American drama in regards to jazz musicians representation has been decidedly one sided, skewed towards the more commercially accessible less socially disruptive narratives. Pieces like Playing Hot firmly plant themselves against the grain as vehicles for the untold stories of creatives that shaped western music and culture for decades to come.

PN: When I think of Buddy Bolden I think of the blues. Building on the rhythmic and melodic sensibilities of Scott Joplin he incorporated the more vocal sounds of the gospel spirituals, making American music forever more a space for improvisation as a communal experience. To me, Mr. Bolden represents a trust in ones own voice in the face of extreme prejudice and civil inequality. It took incredible courage innovate; to find freedom and respite in music’s reckless abandon when the system around him was predicated on bringing him down. That sense of living a life on your own terms in spite of personal tragedy and the constant pressure to conform continues to inspire.

PTC: Talk to us about jazz. What’s your relationship to the music?

PN: “Jazz means I dare you” – Wayne Shorter  — I grew up in a heavily musical city community. Jazz was the natural meeting point for all the things that drew me to music. My relationship to music is similar to my relationship to language. I’m expressing in real time an emotional and intellectual landscape with the intention to communicate to those sharing my space. As a composer, I often write with very specific stories in mind. As an improviser, I’m trying to marry spontaneous creativity with a broader awareness of the energy and humanity in the room. Music is the catalyst through which I personally relate these things. Jazz, in regards to American music, truly laid the bedrock for musicians to explore in so many directions. Without Buddy Bolden, I don’t know what we would be playing.

PN: I play Trombone, Sousaphone, Piano and I sing. Jazz drew me in as a place to express freely with the people around me. There’s an enticing sense of urgency to playing that, as a teenager, I hadn’t found in other music. Jazz also felt like it had some degree of malleability in its evolution that gave space for many people’s stories while still being firmly rooted in the black American experience. It’s how I relate to the world and will always be the foundation of my musical identity.

Peter has a new trio project coming out on Outside in Music in early July. The project combines contemporary jazz with singer songwriter textures and rhythmic environments. They’ll be performing at festival upstate and in the midwest in early August. For info and updates follow Peter on Instagram or Facebook at @PeterNelsonMusic and visit his website, www.peternelsonmusic.com. And don’t forget to catch him in Playing Hot, April 18 – May 12.