The Wild Project, The Nuyorican Poets Cafe, and Pipeline Theatre Company are teaming up to create a cultural collaboration in the Lower East Side via NYC’s Open Culture program. Join us for an artistic exchange of performances, spoken word, theatre, drag, and more! The event will be MC’d by Pipeline’s Artistic Associate, Janice Amaya, and Community Director, Cristina Pitter.

Who: Everyone of all ages!
What: A free, outdoor artistic exchange with performances
When: Saturday, June 12 from 2 – 6pm EST
Where: East 3rd Street between A and B  in NYC 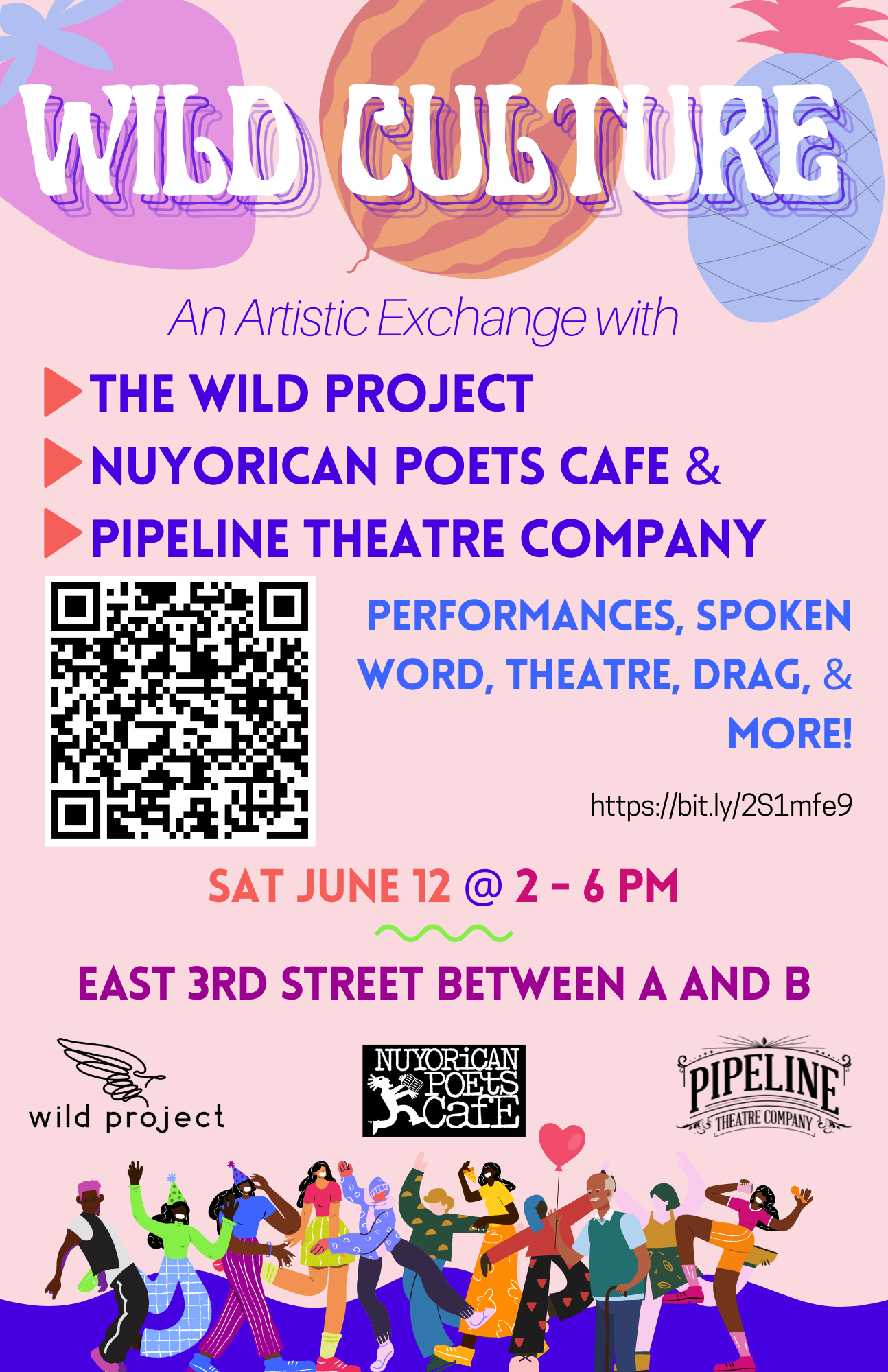 Safety Protocols:
We are requesting that all event attendees comply with our COVID-19 safety protocols. We ask that all guests maintain social distancing, and there will be designated areas for watching performances, with both standing and sitting options available. Hand sanitizing stations and masks will be available as well. 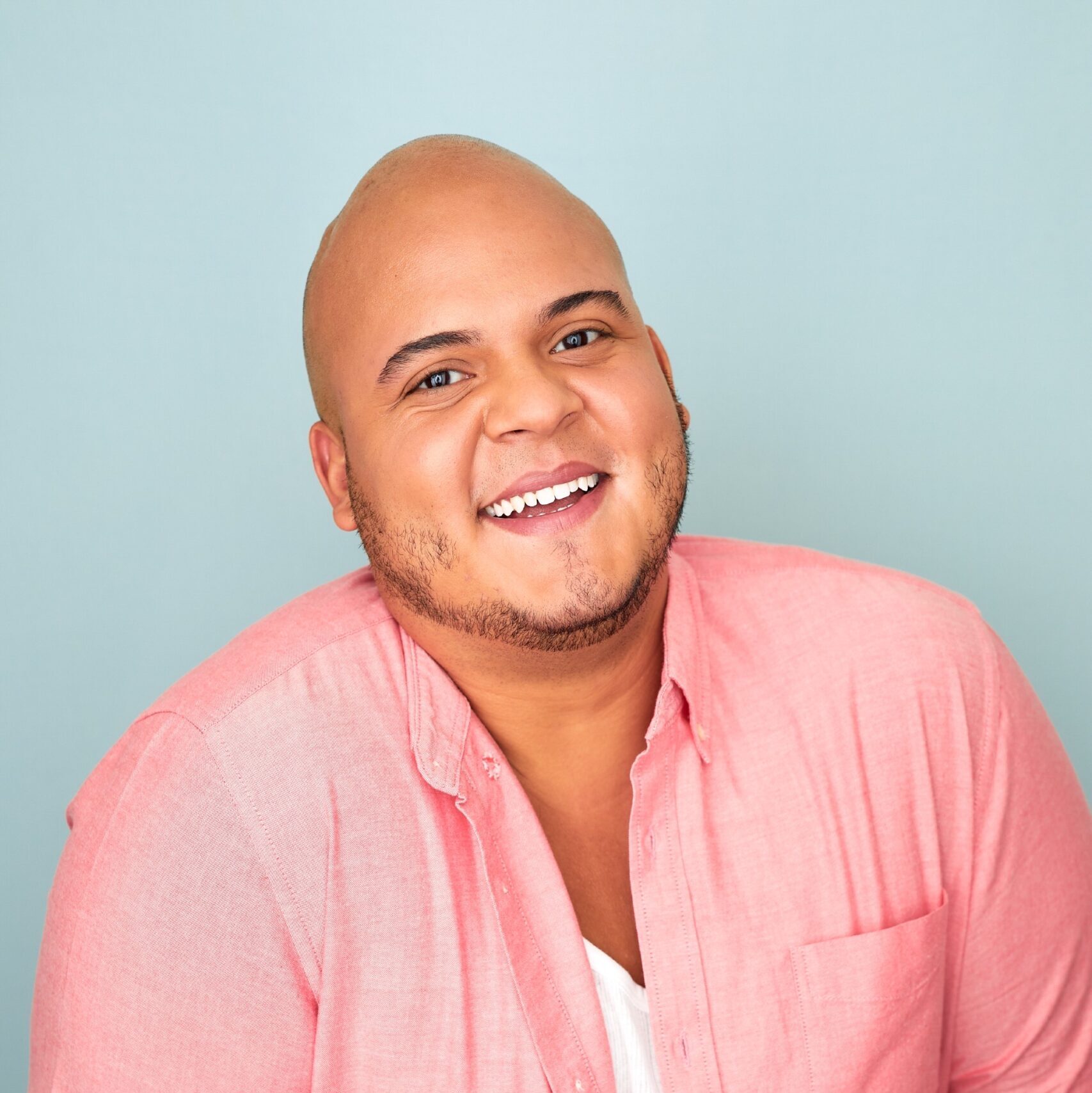 Born & raised in NYC, Nick Luis is currently attending CUNY Baruch College completing his masters in Arts Administration. His love for the arts as a producer, actor and creator has propelled him in dedicating and sharing this with everyone he meets. Nick would like to thank his fairy tribe for their unconditional love and support! IG: @mr.nickluis 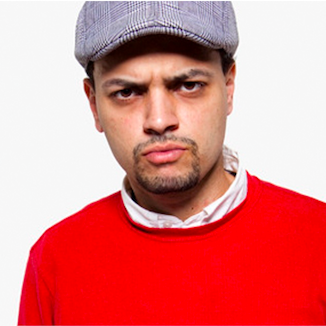 Advocate Of Wordz
Advocate Of Wordz is an award winning performing poet, published author, and teaching artist who has been honoring his craft for over a decade. He is a recipient of the 2014 BRIO Award, a resident artist at Lincoln Center in New York City, and of the Monday Night Online Open Mic for the legendary Nuyorican Poets Café. His work has been featured and/or covered by many major publications including PBS, LA Times, Fox News, Univision and El Museo del Barrio’s anthology “Speak Up, Speak Out”. Wordz has toured many notable establishments such as Princeton University, Roseland Ballroom (Broadway), and Georgetown University to name a few. His book “Advocate Of Wordz; a book of poems and other creative nonsense that is imperative to your existence” can be found on Amazon and is also available at all his live performances. 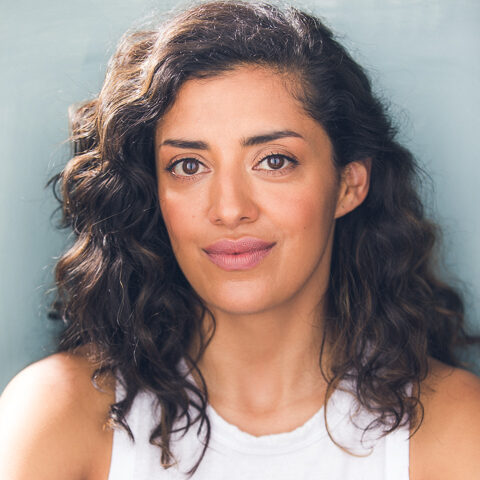 Janice Amaya
Janice Amaya is Pipeline’s Artistic Associate. They are an actor, theatermaker. and organizer of Náhua descent. Currently, they are touring with Cartography (John F. Kennedy Center for the Performing Arts, Playhouse Square, New Victory Theater NYC, The Arts Center at NYU Abu Dhabi) and lead organizer with Creating Equal at the American Repertory Theater. They are a founding member of The Hummm, a theater collective whose aim is to democratize the experimental, and part of 02020, the inaugural artistic cohort of Performance Space New York. Training: MFA from the Moscow Art Theater and Harvard University.

Everything they pour their energy into is in efforts to reach our collective liberation. 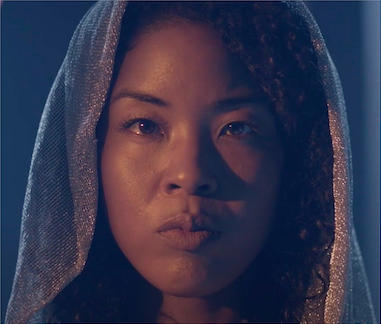 Suzen Baraka
Suzen Baraka is a lawyer, poet, writer, actor and activist who has been performing live for over 17 years. Suzen has featured at the Nuyorican Poets Café for a number of spoken word installations, was two-time Slam Champion of the Big Mouth Bout, went to Slam Nationals in 2006 with the Newark NJ Slam Team and has toured nationally with several different runs of Herstory since 2009. Most recently, she wrote, starred in and released VOTE, originally commissioned by Poetic People Power and directed by Jami Ramberan. Further, she appeared in Let America Be America Again produced by Creatives4Biden and released on Election Day 2020, and featured in Ars Nova’s #OATH2021. Suzen also recently starred in Everlasting , winner of the Viewer’s Choice Award at the 2020 Cannes Short Film Festival. 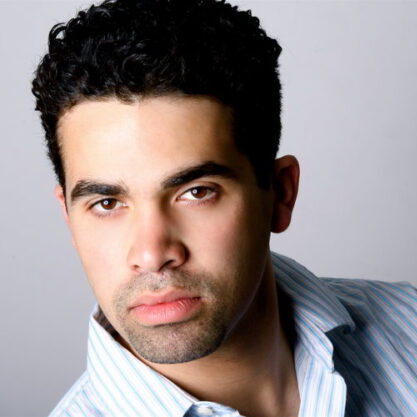 Fernando Contreras
Fernando Contreras is an actor, dancer, singer and life enthusiast. Dominican Republic born, Jersey raised, a queen living in Queens. He is a founding ensemble member of Pipeline Theatre Company. He currently performs in the recurring show, “Shiz: Broadway Meets Sketch Comedy”, recently started a cannabis podcast called Burn With Fern, and is a member of the Dance Cartel. He actually likes long walks on the beach. Find him on instagram at @omgitzfern and @burnwithfernpod 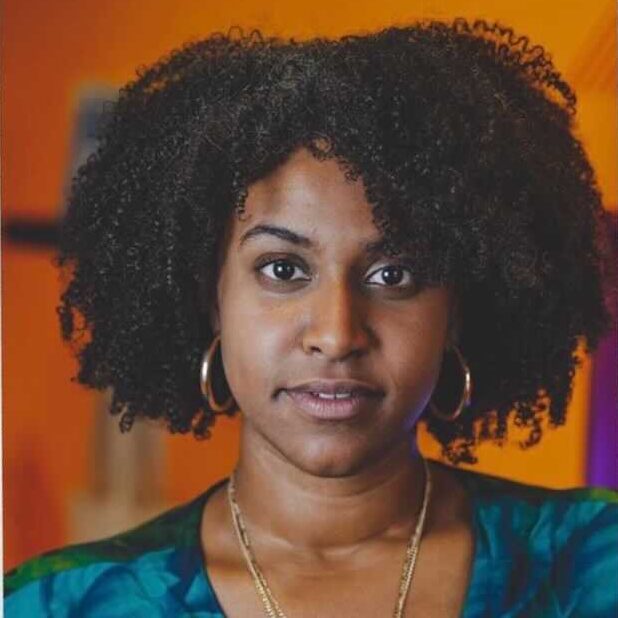 Julissa Contreras, Dominicana from the Bronx, is the creator / host of the “Ladies Who Bronche” podcast and creator of the YouTube hit “Shit Spanish Girls Say”. She is a storyteller, writer, poet, actor, community builder, and educator. Julissa worked in the nonprofit industry for over 10 years both in theatrical and youth development capacities and continues to bridge the two worlds to create dialogue and art that reflects society’s overlooked voices through advocacy. In all of her work, Julissa focuses on elevating necessary dialogue through creating connected experiences. 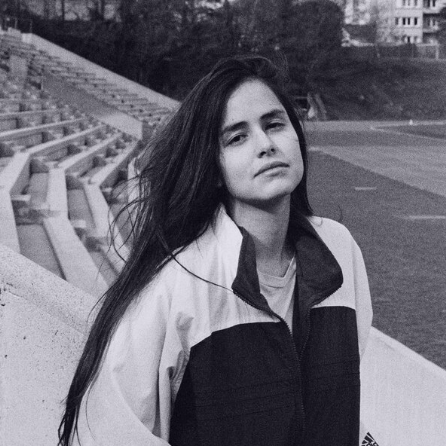 Laura Galindo
Laura Galindo is a multi-hyphenated theatre and music artist, working in the creation and performance of both mediums and deeply interested in how they intersect. In the world of theatre, she is a current Makers Lab resident at Ars Nova where she is in the middle of a long-term development of an original musical. She has a BFA in Drama that she loves to use in theatre and film & TV work. In the world of music, she is in the middle of production for her upcoming EP. Her latest single, Last Place, is available for streaming everywhere. She’s performing with her band all around the city this summer, too. Come check it out. @thelauragalindo 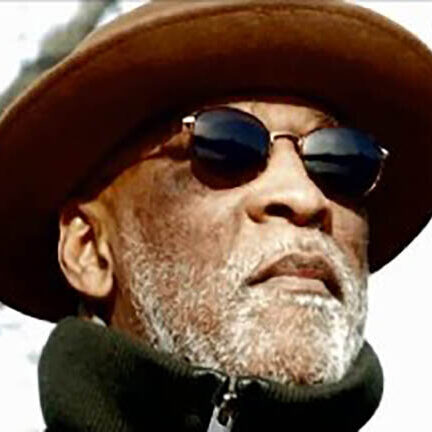 Ngoma Hill
Ngoma is a performance poet, multi-instrumentalist, singer/songwriter, Artivist and paradigm shifter, who for over  50 years has used culture as a tool to raise socio-political and spiritual consciousness through work that encourages critical thought. A former member of Amiri Baraka’s “The Spirit House Movers and Players” and the contemporary freedom song duo”Serious Bizness,” Ngoma weaves poetry and song that raises contradictions and searches for a solution to a just and peaceful world. Ngoma was the Prop Slam Winner of the 1997 National Poetry Slam Competition in Middletown,CT and has been published in African Voices Magazine,Long Shot Anthology,The Underwood Review, Signifyin’ Harlem Review,Bum Rush the Page/Def Poetry Jam Anthology,Poems on the Road to Peace-(Volumes 1,2, and 3)Yale Press and Let Loose On the World-Amiri Baraka at 75. The Understanding Between Foxes and Light-Great Weather For Media and New Rain/Blind Beggar Press 35th Anniversary Issue. He was featured in the P.B.S spoken word documentary The Apropoets with Allen Ginsburg. Ngoma was selected as the Beat Poet Laureate of New York for 2017 by The National Beat Poetry Poetry Foundation. 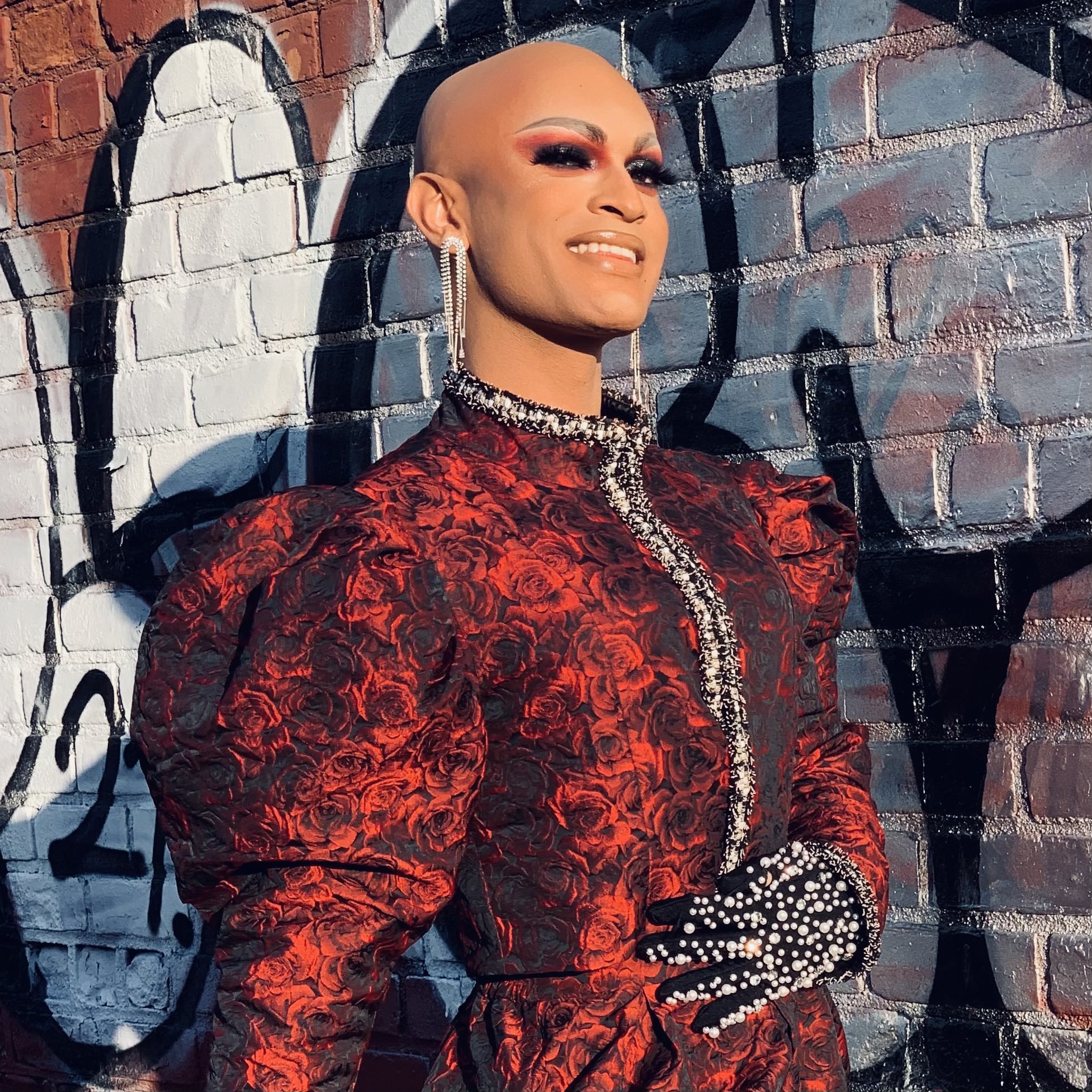 Julie J is a New York City based drag queen, writer, and multidisciplinary artist. Julie’s created work focuses on cultural insertion, relationships between history and identity, and the tactics of escape utilized by marginalized bodies. She is currently developing work that combines drag performance, media, and experimental modes of storytelling. In addition to original work, Julie has performed in work at various theaters and performance institutions including Abrons Arts Center, Mabou Mines, Movement Research, The Dixon Place, La Mama ETC, The Tank, Ensemble Studio Theater, and others. In summary: she did some thangs, and she gon’ keep doing some thangs. Find those thangs on YouTube, at clubs, or a theater near you. juliejnyc.com // @juliej.nyc 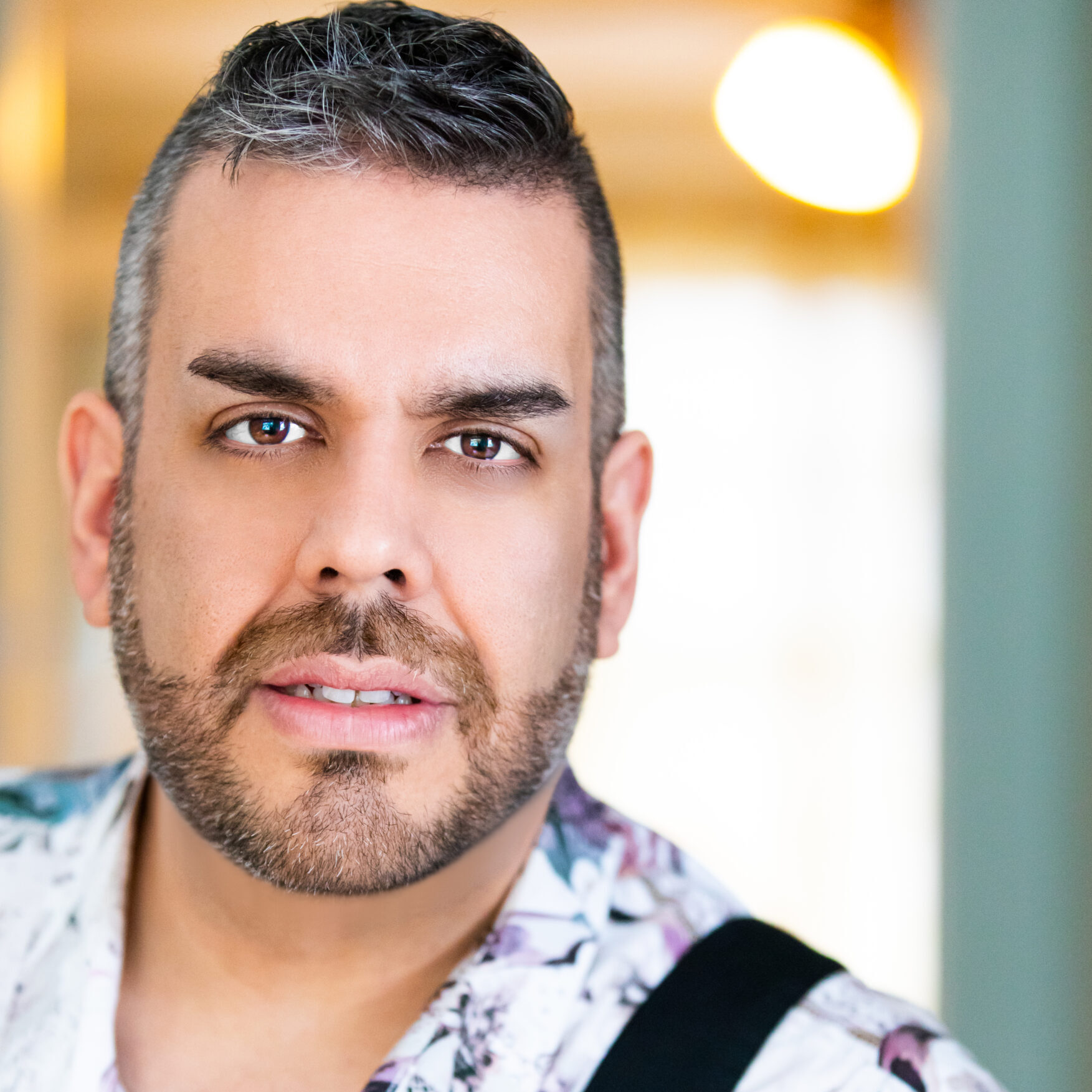 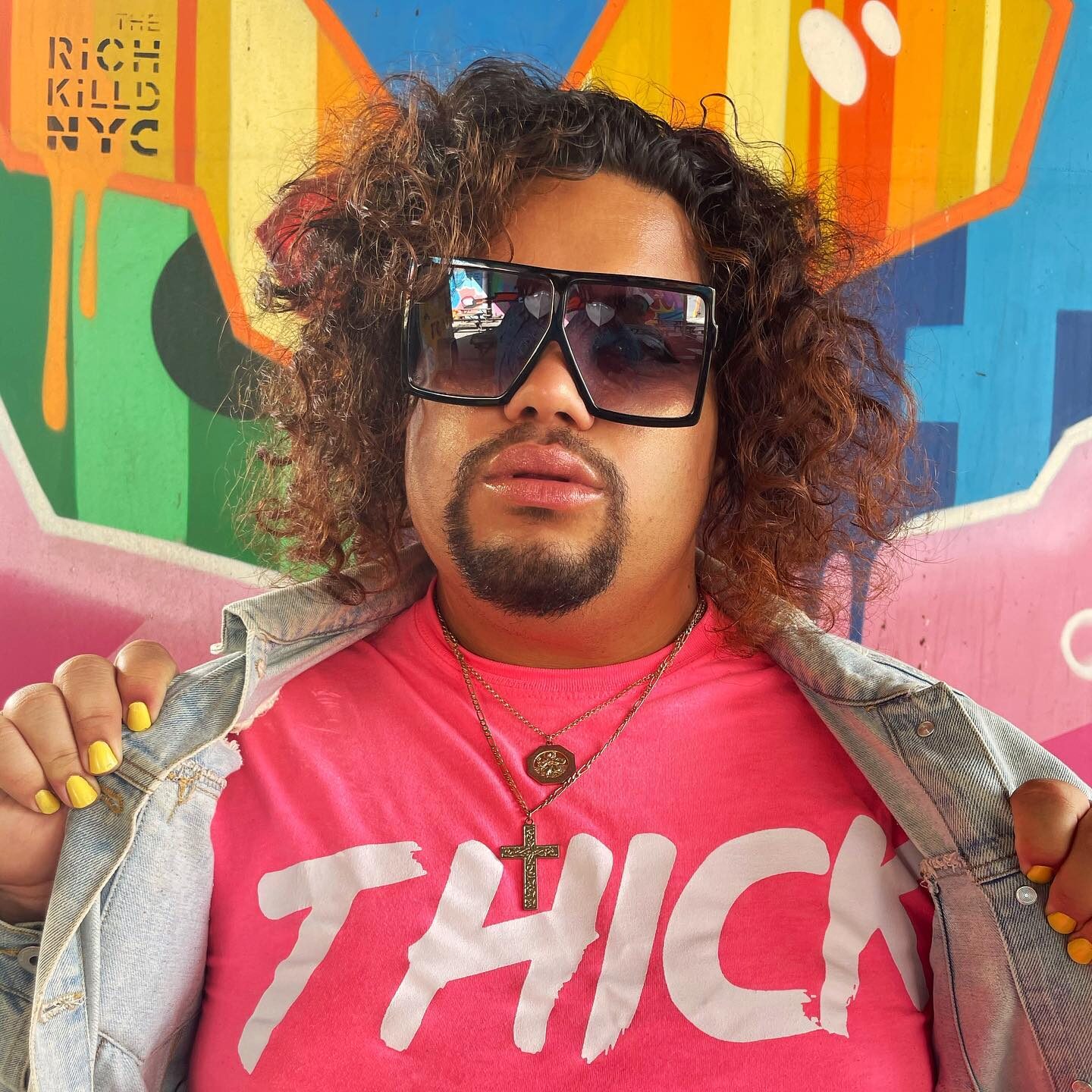 SkittLeZ Ortiz
SkittLeZ Ortiz is a non-binary Latinx singer, actor and content creator from the Bronx, New York. With over 23,000 subscribers and over 12 million views, SkittLeZ produces an array of content that ranges from daily video blogs, and sketch comedy, to musical covers and parodies at SkittLeZMusicTV on Youtube. In 2013, SkittLeZ produced and starred in the Telemundo Premios Tu Mundo nominated hit “Sh*t Spanish Girls Say.” SkittLeZ has appeared in season 2 and 3 of HBO’s “High Maintenance.”  SkittLeZ can be heard as the voice of Debbie in SyFy’s Wild Life streaming on Peacocktv. SkittLeZ is also the cohost of “Ladies Who Bronche” an Afro – Latinx podcast. Follow @therealskittlez on instagram! 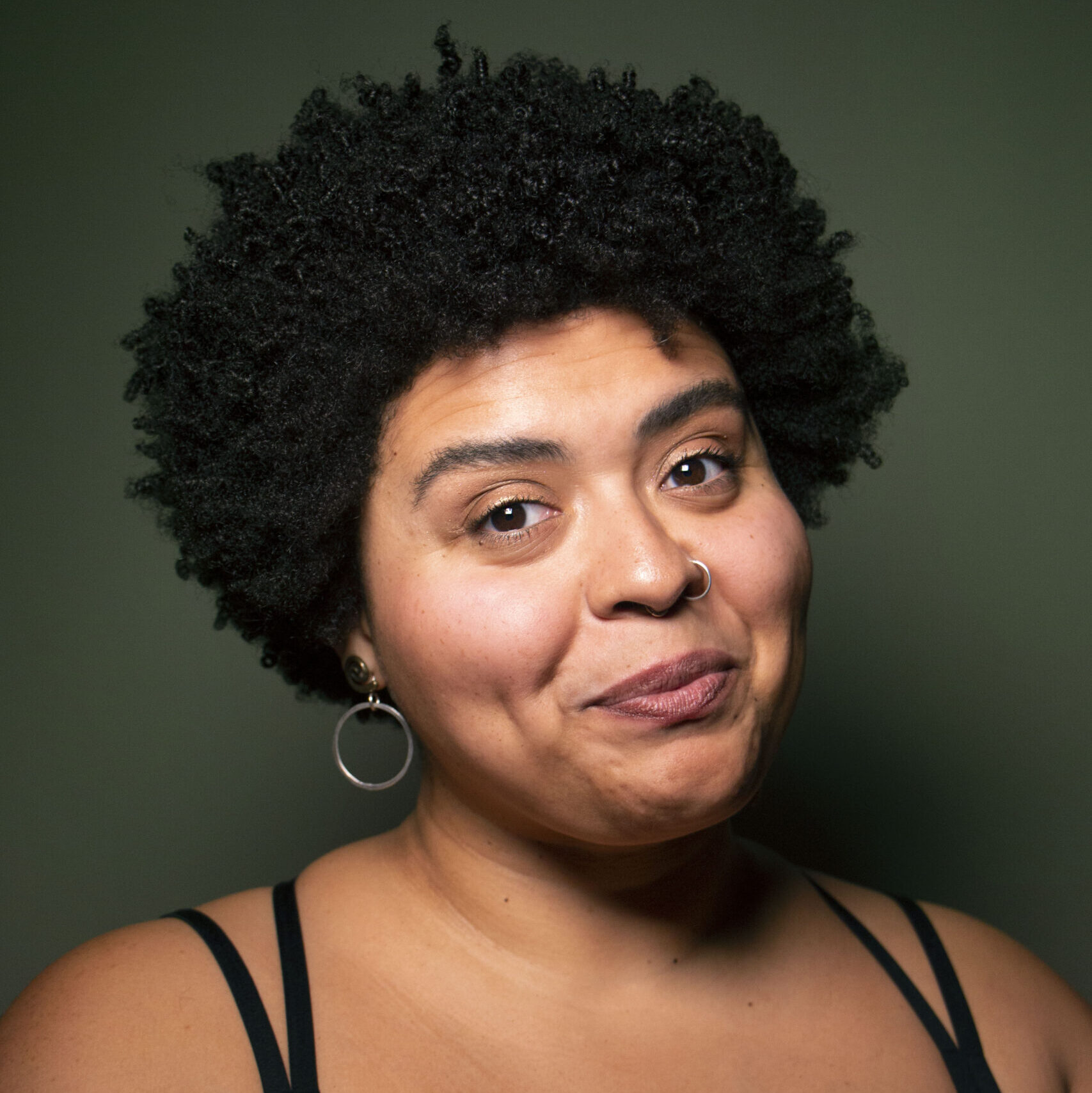 Cristina Pitter
Cristina Pitter is Pipeline’s Comunity Director. They are a queer afro-latine fat babe artist who wants to burn it all down and plant new seeds in the fertile soil. Founder of The Ashe Collective – an ancestral storytelling and community outreach group, Community Director of Pipeline Theatre Company, and company member of Ensemble Studio Theatre. She also has the best laugh ever, SERIOUSLY.  You may have seen her work at JACK, the O’Neill, Target Margin Theatre, Abrons Art Center, The Metropolitan Opera, Ensemble Studio Theatre, Mabou Mines, 59E59, Ars Nova, New Ohio Theatre, Joe’s Pub, The Tank, or three separate but specific bathtubs. You can follow her other antics at cristinapitter.com, including her solo show, “decolonizing my vagina” and as Mistress Lola on Netflix’s Bonding. 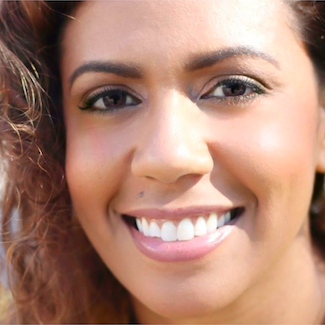 J.F. Seary
J.F. Seary is a Nuyorican poet and actor who has toured nationally and performed in NYC, Chicago, Philadelphia, L.A., Grand Rapids, Atlanta and Orlando. She has also performed for audiences in San Juan, PR, London, UK, Seoul, Korea, Sydney Australia and Paris, France. Theatrical productions include Braided Sorrow, King Lear, Is There Room in your Heart?, A Midsummer Night’s Dream, Vivisection, Soledad Speaks, Of Mothers and Men, HerStory and Is There Such a Thing as Love?. J.F. Seary is currently writing for the web-series The New York Effect and recently joined EMIT Theatre for A Midsummer Night’s Dream and An Isle full of Noises. She is humbled by and eternally grateful for the continued love and support. For more information: www.jfseary.webs.com.