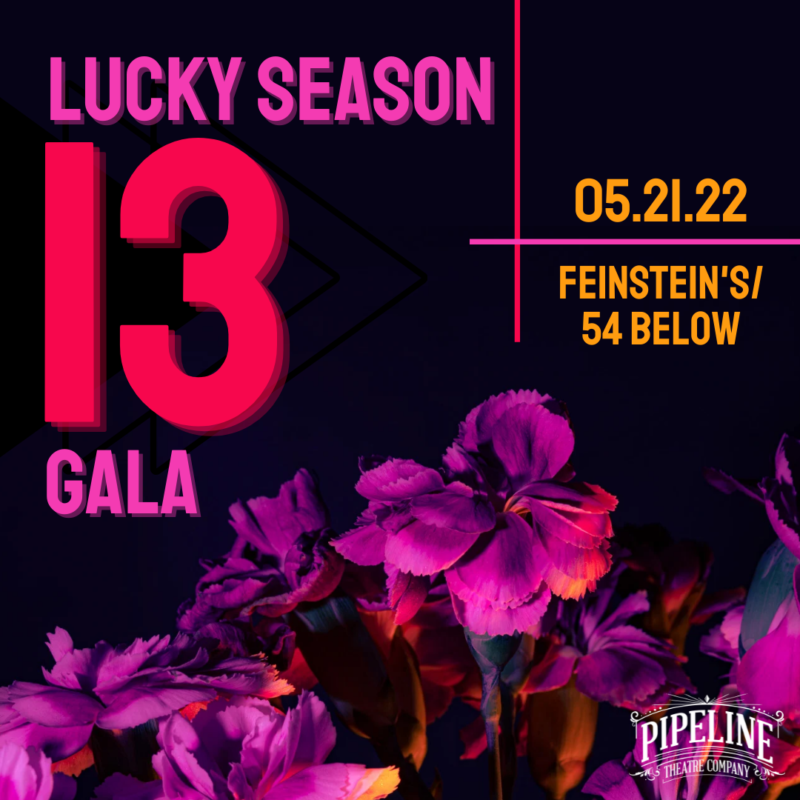 After two years away from live theatre, this season we were lucky enough to successfully complete the run of our NYT Critics’ Pick production, BRUISE & THORN. We want to celebrate our return to the stage this season, and how fortunate we are to have received such incredible support along the way. So without further ado, it’s time to dust off your finest brunch attire for Pipeline’s Lucky Season 13 Gala!

Pipeline’s Gala is an annual opportunity to bring our entire community together to courageously raise a glass to the year ahead. It’s an electric afternoon featuring sweeping performances, uplifting speeches, a delectable brunch and open bar, plus appearances from some of the boldest emerging voices in New York City theatre. Pipeline is known for throwing a heck of a party, and this year we’re celebrating how lucky we are to be surrounded by bold and ambitious talent and wide-spread community support. Hosted by Cristina Pitter. Join us on May 21st!

DIGITAL PROGRAM WISH | $250
Can’t attend? Purchase a Digital Program Wish for Pipeline’s Future to be screened at the event and send us a note for our Lucky Season 13! Once purchased, we’ll reach out with sizing details and specs.

SPONSOR AN ARTIST | $250
Sponsor an Artist to treat an emerging artist from our community to an elegant and adventurous afternoon at the Pipeline gala!

ANDREW BUTLER is an actor, writer, and composer for stage and screen. He first worked with Pipeline in 2013 as an actor in Nate Weida’s Byuioo, and then in 2018 as both a cast member and one of nine songwriters of Jaclyn Backhaus & Andrew Neisler’s musical Folk Wandering. You might know Andrew from his Lortel award-winning musical Rags Parkland Sings The Songs Of The Future (Ars Nova), which will be returning to the stage in spring 2023 (until then, check out the cast album wherever you listen to music!). He has several other musicals in the works with fellow Pipeline artist Andrew Farmer, with whom he received the Jonathan Larson award in 2018. Andrew was also in The Skin Of Our Teeth (TFANA), Futurity (Soho Rep/Ars Nova), Memory Retrograde (The Public/UTR), Girls5Eva (NBC/Peacock), Edelweiss (Ars Nova/OTR), War Lesbian (Dixon Place), Comfort Dogs (Jack), and so on! andrewrbutler.com.

SETH CLAYTON (he/him) is an actor and musician living on unseated Lenape land in Brooklyn, and he’s a proud, founding member of Pipeline. Theatre credits: The Madrid (MTC), Becoming Nancy (Alliance Theater), Peter and the Starcatcher (Actors Theatre of Louisville), I Will Be Gone (Humana Festival), and Folk Wandering (Pipeline). Seth has developed new work extensively with the likes of Leigh Silverman, Jeffrey Seller, and Jerry Mitchell at places like Playwrights Horizons, The Public, New York Theatre Workshop, and here at Rattlestick. TV/Film: Gotham, Mostly 4 Millenials, Stormchaser. You can follow his acting work and indie-pop music @sethclaytonstuff and you can catch him onstage next month in Spindle Shuttle Needle at Clubbed Thumb!

JOEL ESHER (Music Director) is a musical theatre composer and lyricist living in New York City. He a member of the BMI-Lehman Engel Musical Theater Advanced Writing Program. His musical, PharmaBro (with Lauren Gundrum) garnered national attention, culminating in a self-produced run at the Player’s Theater as part of the Player’s Theater self-production residency. He is one of nine collaborating composers on Folk Wandering, which premiered through Pipeline Theater. His TYA Musicals, Sammy Spider and Bagels From Benny enjoyed NYC productions at 92Y. His short musical, Superhots! is a featured musical in TheaterNow’s Ten-Minute Musical Anthology (MTI). His musical Noplace (With Gregory Van Acker and Montse Olmos) received developmental support through the Goodspeed/Johnny Mercer Writer’s Colony in February 2020. Joel is a passionate master teaching artist and music educator, with multi-year partnerships with Disney Theatrical Group, The Metropolitan Opera Guild, Trinity Wall Street, The Dreamyard Project, The Little Orchestra Society, and others. He is the New York regional Music Supervisor of The Story Pirates and a regular songwriting contributor to their podcast. Joel is a graduate of Northwestern University, where he received a Bachelor of Music in Vocal Performance and Music Direction.

DANTÉ JEANFELIX is a Puerto Rican, Haitian and Queer storyteller who has performed Off-Broadway and regionally in various new works from Pipeline Theatre’s Playing Hot to Balls at 59E59 to the World Premiere of Love and Spumoni at Seven Angels Theatre. He has also showcased his own work at The Workshop Theater, The Barn Arts Collective and Atlantic Theater Company. You may have also seen him recently on Law and Order (Season 21) and Holiday in Harlem (Hallmark Channel). You can follow him on Insta: @dantejeanfelix Much Love!

CRISTINA PITTER (Host) (they/she) is a queer multi-spirit afrolatine fat babe artist and abolitionist who wants to burn it all down and plant new seeds in the fertile soil. She also has the best laugh ever. SERIOUSLY.  You may have seen her work at JACK, The Bushwick Starr, Target Margin Theatre, Abrons Art Center, Ensemble Studio Theatre, Mabou Mines, 59E59, Ars Nova, New Ohio Theatre, Joe’s Pub, The Tank, The Metropolitan Opera, or three separate but specific bathtubs. BFA Acting Brooklyn College. Follow her antics at cristinapitter.com.

PHILIP SANTOS SCHAFFER (they/he) is a playmaker creating interactive performances in intimate and unconventional settings. Philip’s work has been seen in bathtubs across the country, listened to over the phone, and found in a series of living rooms (as well as appearing in more conventional spaces). Philip’s work deals with politics, pop culture, intimacy and empathy through participation, humor, music, and more. Philip has a BFA in Directing from Hofstra University and an MFA in Dramaturgy from Columbia University. Philip is 1/5 of the creative team behind WalkUpArts, which they co-founded in 2015. www.philipsantosschaffer.com.

LINTON SMITH II is a producer/artist from New Orleans who currently resides in Harlem, NY. He’s had the privilege of studying music under legendary names like Donald Harrison Jr., Christian Scott, and Reggie Workman, to name a few. Smith has performed in Switzerland, Germany, and the White House. In 2019 he performed in the off-Broadway Pipeline Theatre Company production Playing Hot. He has been in the music industry for over 15 years and it is his greatest passion. Linton’s most active on instagram under @lintwan.don. You can find more information and music from Linton Smith II on his website lintones.com.

JAE W.B. (She Her / They Them) is a singer, theater artist, and night life performer based in New York City. Jae made their off broadway debut in the titular role of Thorn in Bruise & Thorn (Pipeline Theater Co. ART / NY). Other credits include Krissy Mommy Milk Café, Geneva Where Youll Find Me. She will be starring in the radio play Pastel Color Ripples by Gama Valle in the lead role of Xavii (New Light Theater Project). Jae can be seen performing solo Cabaret shows and hosting nightlife events throughout the city alongside, Yasuhiko Fukuoka (Rockbar NYC), Ryan Ortega (Fire Island), and Lance Horne (The Q, The Special Club). Jae has been a featured performer for Cat Cohen’s “Cabernet Cabaret” at Club Cumming and Susie Mosher’s “The Lineup” at Birdland. Commercial and film credits include Facebook, Instagram, Planned Parenthood, and Netflix (The Principles of Pleasure). She has been featured on several podcasts across streaming services including: The Onyx Theory Podcast, The Grey Scale Podcast, In the Nunc, Standby for places, and Conversations with a Mixed Chick. Jae was also announced as an honorary mention for The New Vision Fellowship with the national Queer Theater & Dramatist Guild Jae can be found across social media platforms as: @thejaewb

Our audience policy requires proof of COVID-19 vaccination with photo ID in accordance with the venue’s protocol.

In previous years we’ve encouraged our Galas to be a big ol’ dance party. Now in COVID times, we have selected Feinstein’s/54 Below as our venue to encourage the Gala to feel more like attending a concert at a restaurant. We know that COVID continues to play a role in all of our decision making as we venture back out to in-person events, and so we wanted to share our safety protocols with you! You will have a reserved seat, and can choose to wear your mask as you would if you were dining in at a restaurant. All of our performers will also be tested as we continue to strive to create the safest space for our artists and for YOU!

If you have any questions or requests that would make you feel more comfortable, please don’t hesitate to reach out to us at tickets@pipelinetheatre.org.