Pipeline failed Black artists and the Black community. We failed by not making a public statement earlier – earlier this month, earlier this year, earlier in the decade of our existence. The events of this week have brought an urgency to this conversation, but the actions that precipitated them are far from new. We have been aware of the gravity of this situation, and we did not speak out. This makes us complicit, and for that we aim to make amends. We must do better. We must and will rebuild Pipeline to reflect the just world we need and believe in – a world in which equity is paramount and black lives are safe.

We firmly stand with the Black members of our community, and the Black community at large, in solidarity with their right to assert both the value of their lives and the pressing need for all Americans to act in their support. The murders of Breonna Taylor, George Floyd, Ahmaud Arbery, Tony McDade, and David McAtee are only some of the most recent examples of state-sanctioned racial violence that has existed for centuries – the horrific backbone on which this country was built. In speaking out, we also stand with all Black, Indigenous, and People of Color communities, including disabled, queer and/or transgender BIPOC. 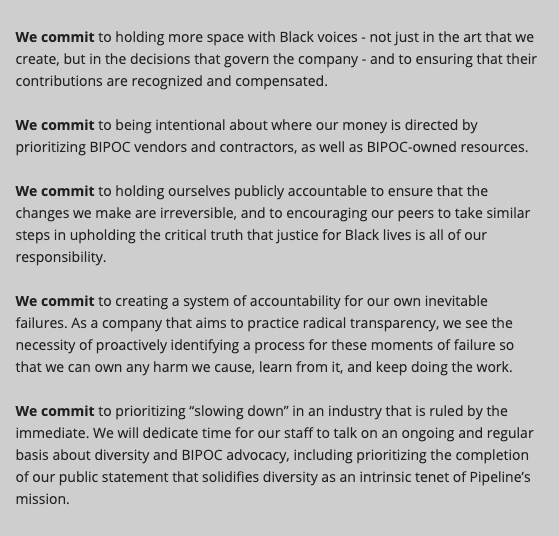 Pipeline has undeniably benefitted from white privilege.  The company was founded predominantly by white artists, who have also historically comprised the majority of the staff, board, and ensemble. Pipeline has benefited from systems of power that favor white people and unjustly oppress people of color.

Our mission is to provoke a more courageous and compassionate world, and we cannot do this without standing up against injustice and white supremacy. As members of the artistic community of NYC, we have a responsibility to oppose the violent, racist, and unjust actions of police in our city and across the country, and call attention to the systematic abuses that BIPOC face. We stand in solidarity with the protests that have come in the wake of these killings. We cannot be complacent while the lives and well-being of the BIPOC artists in our community are endangered.

We recognize and support the demands for change by:

We know that the work we are engaging in is a marathon. It will not be over at the end of the month, or at the end of the year. The commitments outlined here are only the immediate next steps, and we must continue to interrogate our own actions as an organization and as individuals. We are holding a community meeting for our artists on Tuesday, June 23rd at 7:00pm EST to discuss how Pipeline can better hold ourselves accountable to both our past and to our current commitments, to identify what additional future steps should be taken, and to create a space for communal discussion.

The Pipeline staff was educated and inspired by resources written and compiled by black artists and activists in creating this statement.