We’re presenting the world premiere reading of Sukari Jones’ Office Comedy as part of our Week of Extraordinary Risk on June 22, 7:30PM. This new play inspired by Sukari’s experience working in Corporate America where The Empties tried to kill her. Learn more from Sukari below, and reserve you tickets (free, $10 suggested donation) today. 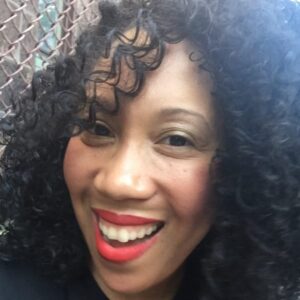 Sukari Jones: Office Comedy is blatantly inspired by* the the twelve years I spent dying in slow motion/working in Corporate Finance. I wanted to write the play to explore concentric circles of hate, watching a strong black femme body dissolve in a drowning of microaggressions over time, like a penny in a lukewarm glass of Coke. My most hated question that I have gotten asked about Office Comedy is hands down “did that really happen?!” I hate this question because it’s not the point of the show. I also hate this question because of course all of it happened.

*Any Resemblance to Actual Persons, Living or Dead, is Purely Coincidental … 🙂

SJ: I have been writing this play in my mind since 2009. Under every florescent light. On every uncomfortable black rolling desk chair with my feet on didn’t-even-try grey carpet. Every time an Empty has degraded me racially or sexually, my heart captured it on emotional videotape. I started posting some of these episodes between myself and the Empties — corporate zombies who think they are hilarious or interesting and think they have hobbies but actually only have spending patterns–on Facebook. My FB friends reacted with pity and morbid fascination, so I decided I’d like to go full out and do a play about the misery I’ve outlasted.

SJ: That it is technically a work of fiction, since I survived.

SJ: The audience laughing even though it’s an office comedy set the morning of 9/11.

SJ: A play with music about a black ballerina who discovers a magical booth that has the power to turn you from minority into white, (but like, permanently, not just for vacay) and she only has three midnights to decide – for now, I’m calling it Shadow Dancer. For me, the show is a meditation on self-hate. And, as always, magic.

SJ: Commission with Barrington Stage Company writing a YA novel adaptation musical about a little boy who gets lightening-based superpowers and uses them to fight bullying; Commission with Atlantic Theater Company writing an original musical called I Have A Dream, inspired by re-centering the unsung civil rights hero Bayard Rustin — the man behind Martin Luther King Jr. who taught him the strategy of non-violence, planned the 1963 March on Washington, and was constantly made to choose between advocacy for black vs queer rights as well as his own identity; continuing to duel with finance bros over the squat rack, inevitably winning, continuing to get swole; Office Comedy going up somewhere!

Office Comedy is a 9/11 office comedy. Its inspired by Sukari’s experience working in Corporate America where The Empties tried to kill her. A play with music. (Also, it’s really a tragedy.)