We’re presenting the world premiere reading of Sam Max’s Coop as part of our Week of Extraordinary Risk on June 23, 3:30PM. This new play focuses on Avery, who is stuck on a family farm, dreaming of the outside world, and who hires a moonshine delivery boy to break her out. Learn more from Sam below, and reserve you tickets (free, $10 suggested donation) today. 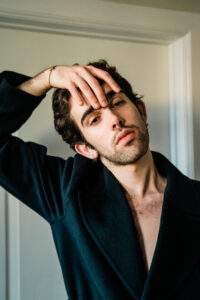 Sam Max: Coop is about young desire and entrapment. It’s told in loops of time that compound inside a girl’s head. The play is partially inspired by the time I spent volunteering on a Catholic farm in Appalachia in college. There were no clocks on the farm, and one staff member was in charge of a schedule none of us ever saw, and they would ring this huge iron bell sporadically throughout the day. We weren’t allowed to use technology during our stay there; it had to be locked inside a car. I remember feeling absolutely psychotic returning to society after that. Some of the volunteers sat in a group at the Mexican restaurant in the town over, and I nearly vomited at the site of a wide-screen TV and the big portions of refried beans.

SM: I started working on the piece in July last year. I have begun using a looping pedal setup in my work, and I wanted to use my time with Pipeline to make a music-play with many vocal loopers going at once. I had an idea that it would follow thirty chickens speaking at one time in a web of sounds. I still want to make that piece, I think, or maybe a concept album of that idea. Coop ended up being very different in many ways, but it still honors the notion of an ensemble of chickens in an oblique way. We don’t see the chickens but hear them as punctuation marks throughout the play.

SM: I am excited about its form, and how the structure of the play – how it works as a machine – feels closely tailored to the psychology of the main character.

SM: I’m making a play called Prosperity! with my friend Jake who performs as a drag persona named June. The script incorporates wet dreams about Michael Phelps, marinara sauce, and a squirrel head. It follows a tense young relationship, and unpacks how our parents’ wealth influences the intricacies of friendship in insidious ways.

SM: I was invited to a residency in Pittsfield called the Mastheads, which will be my entire July. While there I’ll be working on a pilot script, and a new play I’ve been calling Teen Village. It’s about Jewish summer camp and some little deaths. A bit more down the line, I’ll also be performing my show Twin Size Beds at Joe’s Pub in November.

Avery has spent her life stuck on the family farm, dreaming of the outside world. The ghost of her gold-toothed uncle won’t shut up, and her parents won’t stop licking a dead rabbit, so she hires a moonshine delivery boy to break her out.