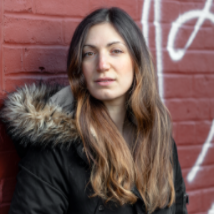 The world premiere reading of Jae Kramisen’s Earth is Greedy is coming to our Week of Extraordinary Risk this Friday, June 29, 7PM. In advance of the reading, we learned more from Jae about this grand three part project, and the bear in the woods that inspired her to keep going.

Learn more in our interview below and reserve your seat now for Earth is Greedy, June 29, 7PM, Jefferson Market Library (425 6th Ave, NYC).

Pipeline Theatre Company: What do you want us to know about your play?
Jae Kramisen: Earth is Greedy is the 2nd play in The Moon Trilogy, three plays that explore a world in which the moon explodes in the sky. In 2013, I finished the first play in the series, The Girl Who Stole the Moon. It was inspired by my experience with Hurricane Sandy and I rolled three plays I was writing into one. I didn’t plan to write a trilogy but after finishing The Girl Who Stole the Moon it was clear that the characters and most importantly the world, still had more to say. Several characters from the first play repeat but they’re in different forms. I decided not to have the 3 plays connect but rather explore windows into parallel worlds.

Earth is Greedy explores a world in the wake of natural disaster. This is a play about survival and picking up the pieces after all is lost. Storylines connect and collide as lights and sound create a sensory experience.

PTC: When and where did you decide to start writing this play?
JK: Earth is Greedy has been with me for well over 4 years now and it feels like a long love story. After completing The Girl Who Stole the Moon, I immediately wrote what was the original first 60 pages of Earth is Greedy. Then I hit a wall. My characters were in the woods but I had no idea what they were doing or what they wanted. I started meditating and one night I had a vivid and clear dream that told me I was to hike the Appalachian Trail. I had never considered it before that. After all, I was a city kid. But three months later I quit my job and spent 6 months hiking the 2,200 miles from Georgia to Maine. By the 3rd day I was given the trail name of “Scribbles” as I chronicled my journey. My characters were taking shape. The world was getting clearer.

On my 30th birthday, while I was hiking through the Shenandoahs in Northern Virginia a black bear jumped out in front of me. It was the most frightening moment in my life. The bear stared me down, kicked up dirt and growled, and in that moment I thought “Shit, I didn’t finish Earth is Greedy!” I pledged that if I got out alive from that bear encounter that I was damn well gonna finish this play. After finishing the trail and returning to NYC, I ended up writing 3 other plays but I know now I had to write those to prep myself for this project. I’d always come back to Earth is Greedy but because the play had been written with such time gaps it was fragmented. I had written well over 300 pages and I knew I needed a way to focus in. This was going to be a big play with a big world and I needed a place that could let me imagine it all. I knew Pipeline was the place for Earth is Greedy to be fully realized. Scrapping everything and starting fresh, I quickly realized that the play I had set out to write 4 years ago was no longer the play I wanted to write now. Most importantly this play set my life on a different path, and after hiking the trail I’ve never been the same.

PTC: What excites you most about this project?
JK: It’s an exciting world! There’s so much happening. The world’s on fire. The moon’s exploded. It’s fierce and action-driven and I’m really excited to see it on its feet! I love the characters. They’ve all become so clear and since they’ve been with me so long I feel like they’ve slowly revealed themselves to me. There’s so much more I want to explore. I’m beginning to think this may be a book.

PTC: In one sentence, tell us something strange that happens in your play.
JK: The moon explodes apart in the sky – and that’s just the beginning.

PTC: Are you working on anything else?
JK: This play has been quite the baby. I’ve focused on this one and I think I’ll keep working on it for a little while.

PTC: What’s next for you?
JK: Continuing to build my healing practice, Urban Gaia, and working on a rewrite of my shaman-centered play, In Search of Glory. And maybe another draft of Earth is Greedy.

About Earth is Greedy

The Moon explodes apart in the sky. Fire and flood ensue as a strange disease begins to spread. The lives of three women haunted by trauma intersect as reality and nightmare collide. Who can you trust when the world is on fire?