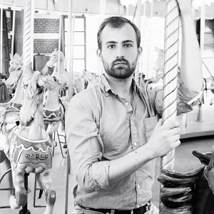 The world premiere reading of Colby Day’s latest play, Untitled Time Dilation Play, directed by Stefanie Abel Howoritz, is coming up on July 10 at 7:30PM as part of our Bonfire Series. Read our interview with Colby below to learn more about this project and also to maybe help Colby name his play.

Colby Day: The title. Seriously. I need one of you out there to come, hear it, and tell me what it’s called. The story starts at the Big Bang, has a couple pit stops with people loosely connected to one another along the way, and ends when the universe does: once energy reaches its final resting state. Tell me what to call this.

CD: I think I decided to write this play while watching the movie Noah. Which is not good. But is a big epic and I’ve been really into big epics lately and wanted to do something like that, on a large scale, about what it means to be human and if there is a god (probably not but that’s cool) and how we’re supposed to exist in the world.

Then of course, figure out how the heck to do something epic about the size of humanity in a little intimate way on stage. I like setting challenges.

CD: It has both cavemen and sentient robots. How could you not be excited?

PTC: In once sentence, tell us something strange that happens in your play.

CD: There are a couple transitions where the stage directions read: “We skip 45,000 years here.”

CD: TOO MUCH. I am all about #contentcreation. Lately I’ve been writing some short movie things which are really fun and strange. I have a Twitter account where I pitch my worst (best) TV show ideas: @unpitched. I’m also programming a series at The Tank in August where I’ll present a “Guided Memory Tour” I’ve been working on.

CD: I can make myself cry on command (by thinking about space)

My grandfather, father, uncle, and I all have a scar in the exact same place

CD: I host an indie alt-comedy show at people’s homes around NYC, which is coming up in early August. Readings at The Tank (from me and other cool cats) in late August. Then Crashbox Theater is producing my play Kitchen Sink Experiment(s) in the fall, directed by Andrew Scoville. Like my Facebook page (Facebook.com/thecolbyday) to hear about all of these. I’m also going to a lot of weddings if you want to be my date.

The Big Bang. A lot happens. Entropy brings the universe to rest. Lights out.