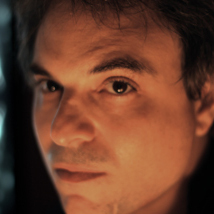 The world premiere reading of Adam Fried’s latest play, Serpent in Quicksilver, directed by Chris Mirto, is coming up on July 19, 7pM, as part of our Bonfire Series. Read his interview below to learn more about this romantic, tragic, violent, emotional, and magical play.

Adam Fried: It’s dreamlike and harsh, romantic and tragic, with a classic narrative structure, witty banter, graphic violence, strong emotion, and card tricks. It’s a fusion of Powell’s “The Red Shoes” and Lynch’s “Blue Velvet”, a shotgun marriage between Fellini and Tennessee Williams, a fevered dream of Antonin Artaud whispered into the ear of Orson Welles.

AF: The germ of the idea took root many years ago when my aunt and uncle described a disturbing magic show they had recently seen, similar to the one at the beginning of my play. A jumble of images and ideas slowly attached themselves to this troubling, thrilling nucleus, and yet it always felt just out of reach, an elusive, tantalizing thing that I could never get right. It’s been percolating inside my head now for decades, and I promised myself I would write it only when I felt I was good enough to realize it properly. That time, I think, has finally arrived. I hope you agree.

AF: Beyond its personal relevance, I’m very pleased to try my hand at a kind of Gesamtkunstwerk, unifying all the different kinds of art that I love into one multi-course banquet, or at the very least, blending them into a tasty theatrical smoothie that’s savory, salty, bitter and sweet.

PTC: In once sentence, tell us something strange that happens in your play.

AF: At the moment, I’m developing the play I wrote for Pipeline’s Matchstick Series into a two-night, site-specific crime epic, as well as completing the final play in my magnum opus, “Johnson Hates Boswell (Pt. 1: Talking for Victory, Pt. 2: My Dearest Enemy, Pt. 3: The Flower of Coping”).

AF: 1. Wes Anderson once asked me for my moussaka recipe.

2. I’ve brought a man back from the dead.

3. There’s a building in The Bronx named after me.

AF: I’m shooting a number of short films over the summer, finishing up work on a feature length documentary titled “Building a 747 in Mid-Flight”, honing a new live sketch comedy show, and hopefully getting a good night’s sleep.

About Serpent in Quicksilver

A magician and his daughter reenact a trauma from their past, nightly on stage, while embarking with a new apprentice on a quest for atonement through the power of art.