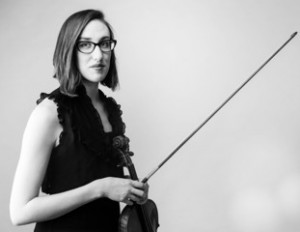 An outspoken proponent of experimental sounds and expression, violinist Charlotte Munn-Wood is an active freelancer, chamber musician, teacher, and curator in New York City and beyond and has joined team Beardo on violin. She is a co-founding member of Du.0 (pronounced “doo-point-oh”), a two-violin experimental music duo, and performs regularly with the Curiosity Cabinet. She is a frequent commissioner of new works and a co-curator of the Blank Space House Concert series. Charlotte is a recent graduate of the Contemporary Performance Program at the Manhattan School of Music, where she studied with Dr. Curtis Macomber. Away from the violin, she enjoys coffee, Dostoyevsky, and petting other people’s dogs in the park.

Learn more about Charlotte in our interview below and reserve your tickets here!

Pipeline Theatre Company: What attracted you to Beardo? What made you want to work on this project?

Charlotte Munn-Wood: I read “the fall of the Russian monarchy” in the description of the musical. That was literally all it took. I’m very enthusiastic about pre-Soviet Russian history.

CMW: My mom wouldn’t let me play viola, so I had to learn violin. I grew into it, I guess. Also I like that it’s a) small, b) very portable, c) easily assimilated by non-Western musical cultures, d) capable of producing a range of bizarre and expressive sounds, and e) has two parts (the violin and the bow – that sort of thing doesn’t happen in living creatures, whose bodies are very boring in that all the parts are connected to one another).

PTC: If you ruled the world, what would you be remembered for?

PTC: Why should someone who has no connection to this show or its artists come see the show?

CMW: It’s about Russia and Russians and who doesn’t want as much of that as possible?

PTC: If you could create a promotional tagline for this show, what would it be?

CMW: “Before Putin, there was BEARDO”