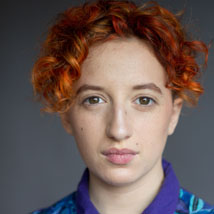 The Pipeline reading premiere of Taylor Edelhart’s The Holdfolk is coming to the Bonfire Series on June 22, 7:30PM. In advance of the reading, we learned a bit more from Taylor about how this project came to be, other projects they have in the works, and making plays for trans audiences first and cis audiences second.

Learn more in our interview below and reserve your seat now for The Holdfolk, June 22, 7:30PM, Jefferson Market Library (425 6th Ave, NYC).

Taylor Edelhart: It’s about elves! Elves who live underground and are a secret now because humanity has taken almost everything from them. For me, it’s a exploration of how oppression works, and how oppressed people integrate new people into their communities, especially when they don’t really want to bring any new people in, but they have to. I’m also deeply invested in creating work that doesn’t put dialogue first as a communication tool, and this piece is a great example of that. There is some talking, but The Holdfolk communicate telepathically, so most of the piece is told through gesture and ritual. But for you, I just hope that it’s a meaningful story about elves. 🙂

TE: I got the idea for this play about a year ago. One of my favorite podcasts, LORE, did an episode that was partially about the huldufolk, the elves from Icelandic folklore that the play is based on. It really struck me how similar the huldufolk story was to experiences I’ve had as a trans person in the present day US – this phenomenon of saying “this group of people is both a menace and also doesn’t exist stop talking about them” was in both the huldufolk myth and all the bigoted thinking around those bathroom bills. This strange assumption that the Holdfolk live in rocks because they want to and not because they have to vs. trans people are oppressed because they decide to be and not because cis people actively oppress them. So I started writing to explore all those feelings the podcast brought up, and to see if I could make a sort of dark tale about what it’s like to be trans in America – to have your history erased, to have your livelihood stolen, to be driven underground – through a community of these elves. And since then, the play has deepened (I hope) into a story about how lots of different oppressions work, and how people are magical and resilient and survive in spite of all of that oppression.

TE: This is the first time I’ve made a gesture-based play for a bunch of people who aren’t myself, and it’s been really exciting to see how other actors tackle a text like that, and how I can make this scripted movement writing style more legible and fun for other people. I’m also deeply invested right now in making work that is for trans audiences first and cis audiences second, and think this piece has the potential to serve trans folks who see it in a big way. I hope so, anyway!

TE: A Holdfolk speaks using a Translator that looks like a big ugly calculator and doesn’t CARE aboUt WORD emPHASIS.

TE: Oh goodness yes! I just finished the first run of my latest solo piece, SWIFT, which is a sci-fi play about how I might actually be Taylor Swift, so that piece might be happening again soon. And I’m planning to put together a little play subscription service from a score of plays I’m planning on writing in the next year. Head to tayloredelhart.com/contact to sign up for my mailing list if you want to stay in the loop on all of that!

TE: I’m going to Lambda Literary’s Emerging Writers Retreat for playwriting this August, and am going to write in a cabin in the woods for 2 weeks as part of the Hill House residency this fall. In general, my plan is to tackle the list of 30 play ideas I have on my phone and just write as many of them as I can until I get tired and/or bored. There’s a play about a cursed house. There’s a clown future dystopia of the King Arthur legend. There’s a radio drama about an intergalactic phone sex line. I’m so excited for all of them! Yay plays! Also I’m getting a cat soon which I honestly think is going to do wonders for my artistic practice. Yes. So excited. Yay.

Deep underneath the earth, a family of elves has pieced together something like a peaceful life. Then a Human shows up. A broken fairy story about learning how to live underground.