We have just about one week left in our run of Playing Hot and we’re excited to end things the way we started: by celebrating the incredible artists who have worked together to bring this little bit of New Orleans to midtown Manhattan. Today we’re pleased to introduce you to Jeffery Miller, one of the trombonists in Playing Hot. In addition to being a trombonist, Jeffery is a singer, composer, and arranger, and is one of several members of our team who was born and raised in Louisiana. Learn more about Jeffery below and snag your tickets to Playing Hot today! We close on May 18, so act fast! 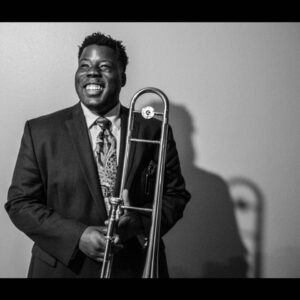 Jeffery Miller: I didn’t hesitate to say yes when Marcus asked me to be a part of this project! I get to play with great, spirited musicians!

JM: I play trombone primarily. I also sing, and play tuba, baritone and piano. I grew up singing around the house and a bit in church. I started playing trombone around age 10 or 11, thanks to my middle school music teacher Keith Hart.

PTC: Will you share a bit of your personal history with us? Where in Louisiana did you grow up and what brought you to New York?

JM: I was born and raised in New Orleans, Louisiana; more specifically the Westbank (Algiers). I literally used to live off of Mardi Gras Blvd, haha. I decided to come to New York in 2014 when I got accepted to Juilliard. Since I’ve been here, I’ve had so many awesome experiences such as touring Europe and Abu Dhabi with Wynton Marsalis and playing a sold-out Madison Square Garden with Preservation Hall and Arcade Fire. I’m excited for what’s coming next.

PTC: What has it been like for you to bring New Orleans to New York through Playing Hot?

JM: I’m always excited and willing to rep my city wherever I go. I’m so proud to be from New Orleans, and it’s the best feeling when I can make people feel that with the sound of my trombone.

PTC: What parts of New Orleans do you feel it’s most important to represent through this story?

JM: The spirit of a true New Orleanian runs deep, and I believe it’s of utmost importance to capture this in the story. And we obviously have to stay true to the integrity of the music. It’s deceptively difficult to play it correctly. I cannot stress this enough.

JM: Papa John Joseph was my great-great grandfather. He was a New Orleans bass player who grew up playing with Buddy Bolden early in his career. Later in his life, he played in the Original Tuxedo Orchestra and the Preservation Hall Jazz Band. Apparently in 1965, he dropped dead at Preservation Hall after playing a crazy rendition of “When the Saints Go Marching In”! Ironically, I grew up playing in the Preservation Hall Junior Jazz Band (I didn’t even know he existed back then)! They even took me to Carnegie Hall when I was 15. Music is so powerfully deep.

You can follow Jeffery on Instagram at @thejefferymiller, on Twitter at @imjefferymiller, and keep an eye out for Jeffery’s debut album, Songs About Women. Until then, you can catch him on stage in Playing Hot (now through May 18). Grab your tickets today, while there are still tickets to grab!