This January 13 – 15 we’re bringing you our second annual Matchstick Series: Strange Tongues, a night of short plays, inspired by 7 works of poetry, and imagined by the PlayLab class of 2016. The event will take place at the Nuyorican Poets Cafe, the historic home for groundbreaking works of poetry, music, theater, and visual arts.

We’ve enlisted an out-of-this-world roster of designers, directors, and actors to create these pieces with our playwrights. Learn all about them below. Tickets are limited and won’t go on sale until late December, but you can get early access by making a tax-deductible year-end-donation to Pipeline. Learn More! 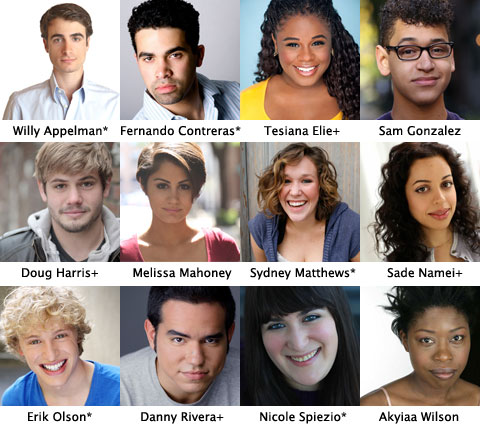 Alison Beatty has been the School Artistic Director at the Atlantic Theater Company Acting School for the past 6 years, where she is responsible for programming, producing, and overseeing a robust season of student shows as well as 2 Atlantic for Kids productions annually. She has had the pleasure of directing and/ or choreographing several ATC for Kids shows, including: The Velveteen Rabbit, Camp Kappawanna, Ivy and Bean the Musical (National Tour), Tilly the Trickster, The Hundred Dresses, The True Story of the Three Little Pigs, Miss Nelson is Missing, No Dogs Allowed, Really Rosie, Strega Nona, The Big Stew, and You’re A Good Man Charlie Brown in addition to collaborating on many projects including plays by Shakespeare, Chekhov, and Brecht in theaters throughout NYC. As a faculty member of the Atlantic, Alison teaches Company Class, in which she mentors the advanced level students through forming their own theater company and producing an inaugural production as an ensemble, and Moment Lab. She is currently pursuing an M.Ed. and M.A. in Psychological Counseling at Columbia University.

Tom Costello has been a freelance director since graduating from NYU/Tisch. He has directed Pipeline’s productions of Sleepless City by Tim Chawaga, Shakespeare the Dead by Alex Mills (Dream Up Festival), and Bubble and Squeak by Evan Twohy, which was a finalist in the 2011 Samuel French Off-Off Broadway Festival. He has been a Resident Director at The Flea since 2011, where he has directed Smoke by Kim Davies, The Wundelsteipen (and other difficult roles for young people); #serials@theflea: Lucifer ex Machina by Sevan K. Greene, Undesirables by Jeff Ronan; The Flying Latke (co-director, 2011). Elsewhere, he has directed Libra Theater Company’s The Thirteenth Commandment by Joshua H. Cohen and has directed numerous productions for Atlantic Acting School where he is also a member of the faculty.

Felicia Lobo is a Brooklyn based director and co-artistic director of Insomnium Theatre Company. Recent directing adventures include Night of the Living Beanie Babies (Insomnium), Abduct, Transfer, Deliver (Ampersand Artists) and The Love of the Nightingale (Insomnium). Other recent theatre work includes The Exalted (BAM Next Wave, Dir. Anne Bogart), The Mermaiden; or, the Monogamy (SSSS, Dir. Andrew Neisler) and The Gray Man (Pipeline, Dir. Andrew Neisler). She is also an Artistic Associate with Pipeline and is forever grateful for their dedication to Serious Make Believe. BFA: NYU Tisch Drama, Atlantic Acting School.

Jesse Thurston is a director and performer. For Pipeline, he has helped to develop plays by Salty Brine, Sarah Einspanier and Jeremy Wine. He has also recently directed for Atlantic Theatre Company, Tiny Rhino and Bookshop Workshops. He is a company member of Story Pirates and a proud graduate of Northwestern University.

Sarah Elizabeth Wansley is a New York-based director. She received her MFA in Directing from UCSD under acclaimed Romanian director Gabor Tompa and a BA in English from Columbia University (summa cum laude). At UCSD she radically re-imagined Seamus Heaney’s The Burial at Thebes and Brecht’s Drums in the Night, developed site-specific work for La Jolla Playhouse’s WoW festival and directed for UCSD’s Wagner New Play Festival. In New York, Sarah has directed at EST / Youngblood, The Flea Theater and the NY Fringe. As Artistic Director of Aporia Theater she directed Patrick Barrett’s Follow Me Down and her own translation of Büchner’s Woyzeck. Lincoln Center Directors Lab (2011), Drama League Directing Fellow (2015).