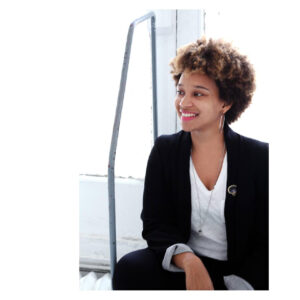 The Pipeline reading premiere of Charly Evon Simposon’s Trick of the Light is coming to the Bonfire Series on June 24, 7:30PM. In advance of the reading, we learned from Charly about how the project got it’s start and the strange and wonderful ways it’s grown and changed over the years.

Charly Evon Simpson: This is a play about a young woman who comes home looking for some time and quiet so she can think. What she gets instead is a yelling-from-the-porch mother, a tarot-card-pulling aunt, three ghost-like-figures that feel way more familiar than they should. This is a play about family, about memory, about rituals, and about place.

CES: This play actually started on a Fresh Ground Pepper BRB retreat. I was in the woods and while I kind of liked the woods—I’m an annoying person now who likes to go “upstate” and “hike” and stay in cabins in the “woods” but I wasn’t then—I was also really spooked by the woods. So I was there, in the woods kind of, thinking about spooky things, and I started this play. That was almost three years ago now. It merged with another project I started in grad school that started with some research I did for a class on various rituals and myths surrounding death and my own experience with a tarot card reading. I realized they were the same story. I realized the characters I had created were a family.

I’ve written quite a few drafts of this play over the last three years. Some said I should have abandoned it, but I kept coming back. I keep coming back. And I’m glad I did and do. There is something here and I’ve been trying to unearth it. Aurora, the main character, is trying to unearth something too. Perhaps that is why I am so attracted to this story and this world—we, Aurora and I, have been on a journey to figure out this world together.

CES: There are two ghost-like little girls who hang out above the stage a lot.

CES: I am having a reading of my play, Scratching the Surface, with The New Group ten days before this reading so June is a month of workshopping plays. I’m also finishing up an adaptation of the fairy tale, Girl With No Hands, for kids.

CES: I’m a member of SPACE on Ryder Farm’s The Working Farm so I’ll be working on a new play with them and this July I am headed to the Kennedy Center in D.C. to work on my play, Jump, at the MFA Playwrights Workshop. I also get to spent a few days in Iceland this August so that’s cool.

About Trick of the Light

Aurora returns to her childhood home for some quiet, but soon realizes something is amiss. Her mother spends nights yelling on the porch and her aunt pulls the same tarot card every day. Not to mention the three mysterious, banshee figures she sees.